Kaupthing bank, a victim of the government's actions?

Times Online recently reported that the British Government may have to face a judicial review legal of its decision to put the UK subsidiary of Kaupthing, the failed Icelandic bank, into administration.

The allegation includes the view that the Treasury acted outside its powers under the Banking (Special Provisions) Act 2008. This act had been put in force only a few months ago to enable the nationalisation of Northern Rock. Kaupthing also thinks, that the Treasury was unjustified in treatin it like the other icelandic Banks and that this may have caused or contributed to the collapse

As one of the first acts the deposits of some 160,000 UK clients had been transferred from Kaupthing to ING Direct Bank. The fact that only a few days later ING received a EUR 10bn capital injection from the Dutch state casts a particular light on this decision.

This view of the events will probably not please PM Gordon Brown, who likes to see himself in the role of leader in the world-wide efforts to deal with the financial crisis. His government is also being criticized for freezing the assets of icelandic banks on the basis of legislation that was introduced to combat terrorism.
Posted by Andreas Laupichler at 7:03 AM No comments:

The most photographed car in London recently... 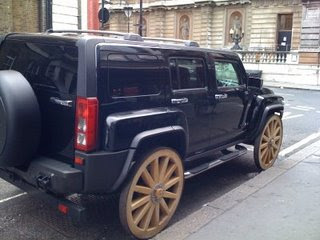 must have been this HUMMER 3 pictured above.
It was parked behind the Royal Academy. But it was not, as one may have thought, the latest toy of some eccentric petrol-head. The waiter in a nearby restaurant told me that the car had arrived on normal tyres which were then swapped for the wooden wheels. Apparently the car had been there for over a week.
It looks like the owner is willing to accept all the parking tickets in exchange for every second passer-by invariably stopping, grinning and taking a photo of this unusual sight.
But, is it art...?
Posted by Andreas Laupichler at 6:53 AM No comments: 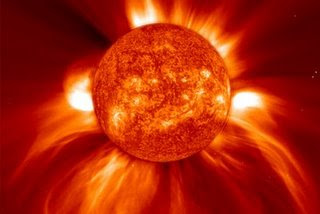 Fantastic photos of the sun's surface at thebigpicture
Posted by Andreas Laupichler at 5:49 AM No comments: 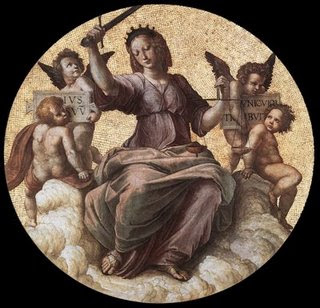 According to a report by Times Online the Court of Appeal has rejected demands to award US-style damages in a recent decision.
The court upheld the principle that damages are limited to compensation for a claimant's provable losses. The judges did not agree with the claimants' demands to share their opponent's unlawfully-gained profits nor did they see it as necessary to deter other potential wrongdoers.
The verdict was reached in a case where a number of poultry farmers and animal feed producers had sued several large companies, including Sanofi-Aventis, BASF and Roche. These companies had been found guilty of breaching competition laws and had been fined 855 Mio. € for illegal price-fixing for vitamines.
The plaintiffs could not prove any financial loss, as they had passed on the supplier's high prices to their customers. Nevertheless they argued that they should receive a part of the cartel's profits. They also asked the court to award punitive damages to deter other cartels.
Both points had already been rejected by a High Court judge. He had found that the system of compensatory damages was adequate. Any demand for punitive damages were also regarded as unfair, as the cartel members had already been fined by the EU and should therfore not be punished twice.
The Court of Appeal confirmed these views. This is regarded as a blow to the government's plans to encourage British consumers and small businesses to pursue legal action against companies that breach competition law.
Posted by Andreas Laupichler at 5:10 AM No comments: 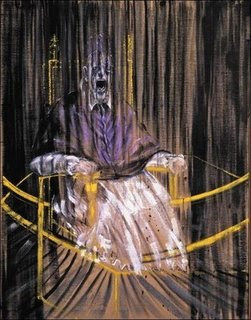 If you are in London some time before the 4th of January 2009 I can strongly recommend the retrospective about Francis Bacon's work that is on display at the Tate Britain.
Bacon, who was born on the 28th of October 1909 in Dublin and had englisher parents. His first retrospective at the Tate was in 1962 but he continued painting into his old age. The current retrospective shows paintings from all periods of his creative life.
Posted by Andreas Laupichler at 4:58 AM No comments:

Do London courts have to fear a flood of claims? 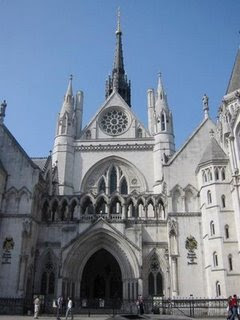 In an interview with the FT (published here) former attorney general Lord Goldsmith warned that the flood of claims that could result from the finance crisis could overwhelm the ressources of London's courts.

After steping down from his position as attorney general Lord Goldsmith took on the role as "European Chair of Litigation" with US law firm Debevoise & Plimpton (a firm where I also had a short stint when I came to London). Lord Goldsmith sees that London's reputation as an international centre for settling commercial disputes could suffer if the courts do not prepare for the increase in litigation.

He quotes difficulties to find a room in the courts that are large enough to hold hearings in large multi-party cases.

The FT, however, notes that the wave of litigation expected after the collapse of Northern Rock has not materialised. The paper quotes lawyers sayint that there were some exisitig cases, but that the parties involved were reluctant to go to court because of the costs, but also beacuse of possible reputational damage.
Posted by Andreas Laupichler at 4:49 AM No comments:

Quote of the day

Nothing to blog about, so here is another "quote of the day". Again, one of a former British prime minister.

"A lie gets halfway around the world before the truth has a chance to get its pants on."
Winston Churchill
Posted by Andreas Laupichler at 4:45 AM No comments: 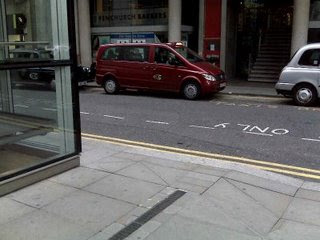 As reported by the local German newspaper "German Link" the world is changing for London's cab drives and their passengers.

Apparently German car maker Mercedes succeeded in passing the strict criteria that apply to vehicles that may operate as a London Taxi by building a special version of the VIANO van. Now the well-known "black cabs" face competition from abroad. As proven by the photo (see above), the new cabs can now be seen on the road.

I often use cabs and I look forward to the new experience. In a black cab one sits more or less on top of the rear axle and therfore feels any bump on the road (and there are quiet a few of those around here :-)
Posted by Andreas Laupichler at 4:38 AM No comments:

Quote of the day

When I log into Google-Mail the website often displays some quotes. I would like to repeat one of them because I like it a lot, but also because it has a relation to my host-country:

"I am extraordinarily patient, provided I get my own way in the end."
Margaret Thatcher
Posted by Andreas Laupichler at 4:36 AM No comments:

Welcome to "Kraut in the City"!
I have been living and working in the City of London as a German Rechtsanwalt for more than a year now. The "square mile" is the heart of the banking- and insurance industry where deals relating to all quarters of the earth are being struck on a daly basis.
This is the environment where I earn a living as a "Registered European Lawyer" and I would like to offer my readers the chance to participate in the develpments and discoveries that catch my attention.
I hope you enjoy the read!
Posted by Andreas Laupichler at 4:31 AM No comments: