I wish you a very merry christmas and a healthy, happy and successful New Year!

Posted by Andreas Laupichler at 3:10 AM No comments: 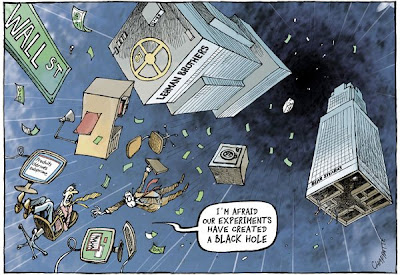 Posted by Andreas Laupichler at 2:16 PM No comments:

How Computer Models Doomed the Markets 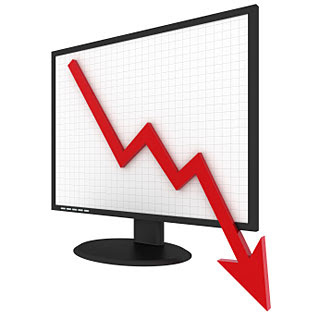 A recent Article in the Scientific American (click here) analyses how certain presumptions that served as the basis of computer-models to estimate the level of financial risk of a portfolio for a set period at a certain confidence level contributed to the recent financial crash. I am looking forward to hearing about statements from European insurers and their regulators in this respect, as comparable models form a vital component of the preparations for the future "Solvency II" regulatory regime.

(via The Big Picture)
Posted by Andreas Laupichler at 1:18 AM No comments:

In a recently published memo (click here for a full version), the NYSID states that a D&O liability policy may not include a provision that places the duty to defend upon the insured, rather than the insurer.
Click here for a comment by Carrie Cope, a Chicago based lawyer, who disagrees with the department's view both from a legal as well as a practical standpoint.
(via D&O Diary)

Posted by Andreas Laupichler at 9:43 AM No comments:

I have been travelling a bit in the last few days, so there have been no new posts for a while. Waiting for my flight at Stansted airport I noticed this: 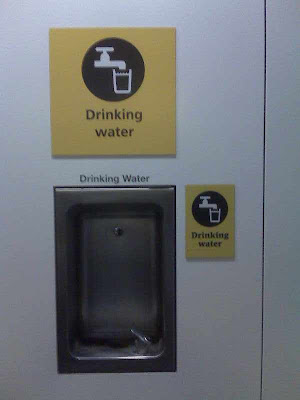 I wonder about the story behind this overload of obvious information.
Posted by Andreas Laupichler at 6:10 AM No comments:

In London you don't get anywhere in a car, even at the weekend when the congestion charge is not due. That's why it was one the best ideas of 2008 to buy a scooter (Vintage 1960) and just zoom past everyone in the traffic jam. We bought our Vespa at Scooter Emporium. Marco and his team import them directly from Italy and restore them beautifully. Definitely worth a visit, not just because the shop is close to famous Brick Lane.
Posted by Andreas Laupichler at 1:16 PM 1 comment:


How credit cards become asset-backed bonds from Marketplace on Vimeo.
(via boingboing)
Posted by Andreas Laupichler at 2:37 AM No comments:

What has happened or will be going on...

in London is nicely described at Londonist. This website is part of a group of blogs that are all ending in -ist and they all describe what their contributors have experienced in their respective cities or informs readers about interesting events that are coming up.
Posted by Andreas Laupichler at 2:21 AM No comments:

I look forward to reading the answer to this one... 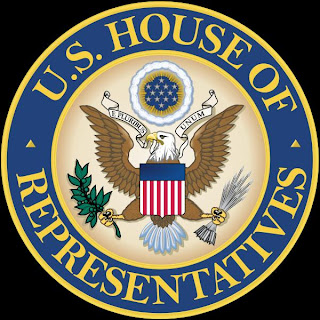 Here is a copy of the letter that Rep. Elijah E. Cummings (D-Md.), a senior member of the House Committee on Oversight and Government Reform and a member of the Joint Economic Committee, sent Edward Liddy, President & CEO of AIG.
December 1, 2008
Mr. Edward M. Liddy
Chief Executive Officer
American International Group, Inc.
70 Pine StreetNew York
NY 10270
Dear Mr. Liddy:
I write today to request that American International Group (AIG) fully disclose to the public the extent of the payments being made to senior company executives under your employee "retention program." The limited information that is currently available to the public about this program is insufficient to constitute the level of disclosure that the American taxpayers, who have bailed out this firm repeatedly in recent weeks, have the right to expect.
In form 8-K dated September 22, 2008, and filed with the Securities and Exchange Commission (SEC), AIG disclosed the following: "On September 22, 2008, a retention program of American International Group, Inc. ("AIG") became effective. The program applies to approximately 130 executives and consists of cash awards payable 60 percent in December 2008 and 40 percent in December 2009."
AIG has recently indicated that it will not provide performance bonuses in 2008. However, in what appears to be a disingenuous "slight of hand," AIG has announced its intention to continue to provide the retention program payments (commonly known as retention bonuses) previously announced in September - albeit some executives have apparently opted to delay receipt of these payments (but not to forgo them).
Thus, in form 8-K dated November 24, 2008, and filed with the SEC, AIG disclosed the following: "On November 24, 2008, the Executive Officers of American International Group, Inc. ("AIG") who participate in its previously disclosed retention program, including Chief Financial Officer David Herzog and Executive Vice President Jay Wintrob, volunteered to delay payments thereunder, with the first installment being delayed from December 2008 until April 2009 and the second installment being delayed from December 2009 until April 2010. Chairman and Chief Executive Officer Edward M. Liddy does not participate in this program."
In September of this year (and several days prior to the SEC filing announcing the "retention program"), the U.S. taxpayers provided a bailout loan of $85 billion to keep AIG afloat; in return, the federal government received an ownership stake in the firm. Subsequent actions increased the total size of the bailout to more than $150 billion - and restructured some of the initial loans provided to the firm.
Without taxpayer intervention, AIG would have ceased to exist and, to be blunt, all of its employees would have lost their jobs.Against this background - and given the massive layoffs occurring at other major financial entities, such as Citibank - the American taxpayers have a right to know why senior executives at AIG, who are frankly lucky to still have jobs, need to receive additional bonus payments of any kind to retain them at AIG.
To that end, I request that AIG disclose to the public the following information:
1. Which executives in which AIG divisions are receiving the retention payments - and how much is each executive receiving" What are the base salaries of the executives receiving the retention payments?
2. Are all executives delaying receipt of these payments until April 2009 - or, if any executive is not delaying receipt of the payments, which executive or executives is/are receiving payments in December 2008 and how much is each executive receiving?
3. Why is it necessary for any AIG executive to receive a retention payment - and why is it necessary that these be scheduled for April 2009 and April 2010?
4. What will be the source of the retention payments provided in 2009 and 2010?AIG has previously claimed in correspondence to me that it is working "to create a transparent, accountable culture to regain the trust of the American people."
The disclosure of the information requested here will be a first step toward providing the kind of transparency that the American people have the right to expect from a private firm to which they have provided more than $150 billion in financial assistance.
Sincerely,
Elijah E. Cummings
Member of Congress
via insurancenewsnet.com
Posted by Andreas Laupichler at 9:29 AM No comments:

Presenting the Federal Bailout Application Form that is “so simple, and easy to use, that even Skadden Arps should bill no more than $2.7 million to review it.”
(via Securitiesdocket)

Posted by Andreas Laupichler at 4:05 AM No comments: 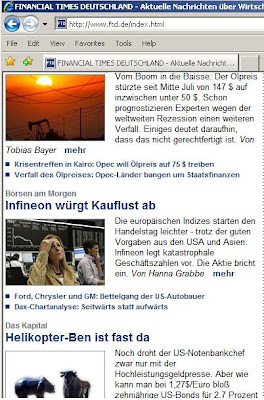 The female employee of Deutsche Börse, who caught my attention in the past because she was frequently displayed on the front pages of newspapers and on internet websites in connection with bad news from the stock markets (see here, here and here) has made a new appearance at FTD Online today (see photo above). Unfortunately my whish that her image should be used in connection with positive news for a change was not fulfilled. The article below her image reports about the negative effects that the high losses reported by Infineon are having on the markets :-(
Posted by Andreas Laupichler at 2:09 AM No comments: 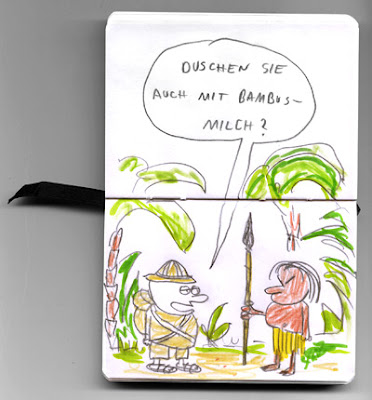 During a recent visit at Spiegel Online I made one of the most interesting discoveries with regards to cartoons for quite a while. The artist has a website (click here). Fluency in German required to understand most of the jokes.
The one above says: "Do you also use bamboo-milk in the shower?"
Posted by Andreas Laupichler at 6:01 AM No comments: 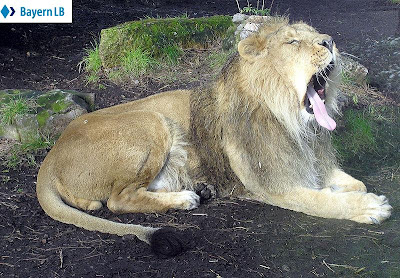 Pointing out that Bayern LB is a "system-relevant" bank, a term that has been used by the government to denote banks that the could expect to be saved from collapse without mentioning specific names, the State of Bavaria (whose heraldic animal is a lion) has recapitalised the bank by EUR 10 billion. Bayern LB's loss-making ABS investment portfolio has been ringfenced by an injection of a further EUR 6 billion and by applying for a EUR 15 billion guarantee from the German Financial Market Stabilisation Fund (SoFFin). The Bavarian Sparkassen (regional savings banks) - previously large shareholders in Bayern LB - were apparently unwilling to take the risk of further investments and abstained from participating in this raise of the bank's capital.
The announcement of the above mentioned measures comes with plans to dramatically reduce the bank's headcount. Around 5,600 staff out of the Group’s total 19,200 will be affected. Staff reductions will be implemented over the five years to 2013. At least 1,000 jobs will be lost at BayernLB in Munich and the branch offices, about 200 outside Germany.
The banks press statement (click here) announced a new business model, re-focussing on Bavaria, Germany and certain European countries. International activities will be scaled down considerably. In a contradictory statement the bank announced that "BayernLB will be exiting from Asia completely. The Hong Kong and Shanghai branches and Beijing, Tokyo and Mumbai representative offices will be closed down, along with, in Europe, the Milan branch. The New York and London branches, which are key to the German customer business, will be streamlined considerably."
In the next sentence the "complete withdrawal from Asia" is relativised sentence by stating that "the German Centres in Shanghai and Delhi.Gurgaon, where BayernLB will continue offering support to German middle market companies looking to do business in the emerging markets of China and India" will be unaffected.
Posted by Andreas Laupichler at 4:21 AM No comments: